Nearmedic at the Russian Investment Forum 2019

Nearmedic at the Russian Investment Forum 2019 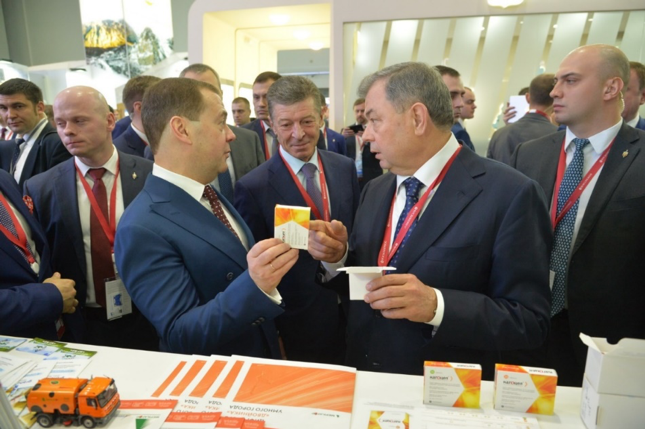 The Russian investment forum was held in Sochi on February 13-15, 2019. Its principal agenda deals with the implementation of national projects. At the booth of Kaluga region, the Nearmedic company presented products manufactured at the Nearmedic Pharma plant in Obninsk: the antiviral drug Kagocel and the set of reagents for the genetic identification of and the establishment of kinship. On February 14, in the framework of the forum, Russian Prime Minister Dmitry Medvedev and Russian Minister of Industry and Trade Denis Manturov visited the official display booth of Kaluga region.

Dmitry Medvedev displayed vivid interest in the products of industrial and pharmaceutical companies presented at the Kaluga region stand, in particular, he paid attention to the antiviral drug Kagocel by the Nearmedic company recommended for the treatment and prevention of SARS and influenza in adults and children from 3 years old. The Prime Minister noted that the country now is experiencing an increased incidence of SARS and influenza, and reminded about the importance of prophylaxis. During the conversation with the Governor of Kaluga region Anatoly Artamonov, Dmitry Medvedev also showed interest in another product of the Nearmedic company, namely the set of reagents for genetic identification and the establishment of kinship, the full cycle production of which had been launched on October 31, 2018 at the Obninsk Nearmedic Pharma plant.

The event was organized by the Roscongress Foundation. The participants of the Russian Investment Forum in Sochi signed 567 agreements and protocols of intent for a total amount of 968.033 billion rubles (which includes only agreements, which values do not present a trade secret). The event was attended by more than 8 thousand leading economists and entrepreneurs, experts, journalists, heads of large companies, representatives of federal and regional authorities. The forum was covered by 1,326 media representatives (1,300 Russian journalists and reporters, and 26 foreigners).

Kagocel is an original antiviral drug designed for the treatment and prevention of SARS and influenza in adults and children from 3 years; it is a multiple winner of the Russian Pharma Award, Green Cross and Product of the Year awards. The drug has been recognized by both professionals and consumers, and has been enjoying the status of an effective, safe remedy against influenza and SARS.